Japan’s own expert witness in the whaling case at the International Court of Justice has cast doubt on the number of whales it kills in its Antarctic program.

The expert, Norwegian Lars Walloe, also told the court that he did not like the inclusion of fin and humpback whales in the whaling program.

And he confirmed that a founding father of the global whaling treaty believed that if any whales were to be killed for scientific purposes, the number should be fewer than 10.

Australia is asking the ICJ to halt the Japanese program, known as JARPA II, which has a self-awarded quota of up to 935 minke whales, 50 fin whales, and 50 humpbacks.

Japanese whalers have taken more than 10,000 whales under the treaty’s scientific permit clause, including 18 fin whales, but are yet to take any humpbacks.

Professor Walloe, Norway’s foremost scientific expert on whaling, was called before the court in The Hague by Japan to defend the program, which he said was “definitely” scientific research.
Australia has argued to the court that the program is commercial whaling cloaked in the lab coat of science.

Under cross examination by Australia’s solicitor-general, Justin Gleeson, SC,  Prof. Walloe conceded that he had difficulties with the quotas chosen in JARPA II.

“The reason is, and that is one of the, as I state here, weaknesses of the JARPA II documents, that I do not really know how they have calculated the sample sizes,” Prof Walloe said. 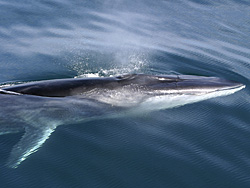 He agreed with Mr Gleeson that he had attempted to understand the numbers that he found difficulties with, but they were not in his report to the court.

“I think they are in my desk back in Norway,” he said.  “I do not have them in my mind here now.”

Professor Walloe said he had never liked the inclusion of fin whales, and there were difficulties with humpback whales being included in a program that was meant to examine competition between species.

“I consider especially the proposal of fin whales not very well conceived because the main part of the fin whale population are outside the area of JARPA, further to the north,” he said.

Although humpbacks were considered a “sacred” animal, at least they lived in the same area as minkes, he said.

“There are many questions you could ask about the humpback, but I understand also that it is emotionally difficult.  And I think it is possible, even without sampling humpbacks, to get the information about the changes in the ecosystem and perhaps about the competition.”

Professor Walloe also revealed that the first chair of the International Whaling Commission, Birger Bergersen wrote when the organisation was founded that it should be possible to kill whales if needed for examination of their anatomy.

“If you are an anatomist, you would probably in some cases only need one animal but what he said was a low number and he wrote in that note, for example, less than ten,”  Professor Walloe said.

The case continued on Thursday with a defence of Japan’s rights under the IWC treaty to conduct its own scientific research, without authorisation from the organisation or consent from its scientific committee.

Australia failed to prove a central argument to the 16 judges that Japan had acted in bad faith, said counsel for Japan, Vaughan Lowe QC, of Oxford University.

But that is not so.”

The case is continuing