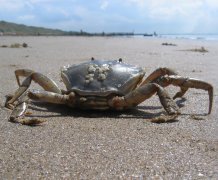 The researchers used fluorescently labelled polystyrene microspheres to show how ingested microplastics were retained within the body tissues of the common shore crab, Carcinus maenas. Multiphoton imaging suggested that most microspheres were retained in the foregut after sticking to hair-like ‘setae’ structures within the crabs.

Plastic is part of our everyday lives and has grown in use substantially over the past seven decades – from 1.7 million tonnes in 1950 to an estimated 288 million tonnes in 2013. Around 40 per cent of this is believed to come from packaging material, most of which is single use and therefore disposed of.

Dr Watts added: “This is a human issue. We have put this plastic there, mostly accidently, but it is our problem to solve. The best way to do this is to reduce our dependency on plastic. It comes back to the old phrase: reduce, reuse and recycle.”

The study, published in the journal Environmental Science and Technology, was funded by CleanSeas, a multidisciplinary and collaborative research project addressing marine litter from different perspectives. It aims at providing Member States and other stakeholders with improved knowledge, methods and tools to be able to better define, monitor and achieve a marine environment free of harmful litter levels by 2020 (Good Environmental Status – GES – as required by the Marine Strategy Framework Directive – MSFD). In doing so, it will deliver a set of integrated results that will provide transparent and useful guidance to policy makers and stakeholders dealing with marine litter mitigation.