Media release from the University of Cambridge

Debris from forests that washes into freshwater lakes supplements the diets of microscopic zooplankton and the fish that feed off them – creating larger and stronger fish, new research shows.

The researchers warn that, as forests are eroded through human activities such as logging, the impacts will be felt in aquatic as well as terrestrial food chains. END_OF_DOCUMENT_TOKEN_TO_BE_REPLACED

The CSIRO has told a world aquaculture conference in Adelaide the industry already is facing challenges from climate change.

Barramundi – Rising water temperatures are a challenge for fish farming.

The fast-growing industry generates more than $1 billion annually for the Australian economy and CSIRO research scientist Alistair Hobday says aquaculture operators have been making a strong impression in the international marketplace.

“I think aquaculture operators in Australia are very sophisticated, they grow high-value products that go to international markets as well as our domestic markets and I think they’re well set up for coping with these changes,” he said.

But Dr Hobday says aquaculture operators will need to find ways to adapt to rising temperatures.

The CSIRO says temperatures have risen by one degree Celsius in the past century in Australia, but by more than two degrees in the south-east and south-west of the nation. END_OF_DOCUMENT_TOKEN_TO_BE_REPLACED

Since 2009, catfish farming in Alabama, Mississippi and Arkansas has been seriously impacted by an emerging strain of Aeromonas hydrophila, which causes Aeromonas septicemia in catfish. A serious infection that can cause death in as little as 12 hours, Aeromonas septicemia’s clinical signs include skin lesions and blood loss. END_OF_DOCUMENT_TOKEN_TO_BE_REPLACED

The lionfish possesses up to 18 needle-like dorsal fins that can deliver venom. It’s naturally defensive, and utilizes its camouflage and fast reflexes to capture prey. They can even harm humans and cause nausea and breathing difficulties with their venomous sting. The lionfish is native to reefs and rocky crevices, and they’ve made their way to Florida’s Atlantic coast 25 years ago. END_OF_DOCUMENT_TOKEN_TO_BE_REPLACED Professor Ward is taking his findings from the Philippines and other expeditions to a meeting in Washington DC next week of the US Fish and Wildlife Service. This meeting will determine US policy on Nautilus trade before the next round of the Convention on International Trade in Endangered Species of Wild Fauna and Flora (CITES). END_OF_DOCUMENT_TOKEN_TO_BE_REPLACED 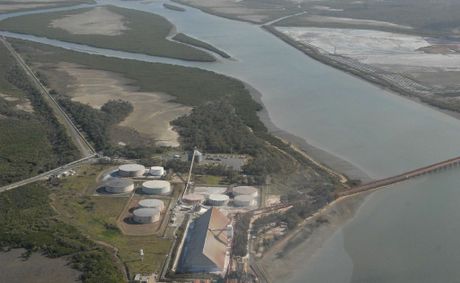 DISEASED fish are again being pulled from the waters of Gladstone Harbour, almost two and a half years after the harbour was closed amid a contamination scare.

But while one fisherman has pulled in a load of fish he believed was diseased, wholesalers and authorities in the region have not reported a wider trend to date.

A disease outbreak in 2011 coincided with a major dredging project underway by Gladstone Ports Corporation, the first stage of which was completed last year.

That controversial project is currently the subject of a class action in Brisbane courts, with numerous Gladstone fishers and crabbers seeking compensation for lost grounds. END_OF_DOCUMENT_TOKEN_TO_BE_REPLACED

TALK about having a frog in your throat! A North Queensland angler was left stunned after he found a live green tree frog sitting inside the throat of a jungle perch he caught on the weekend. SURPRISE: Angus James caught a Jungle Perch in North Queensland and when he removed the hook he found a frog inside it’s mouth. Photo: Angus James

Angus James began unhooking the fish to throw back in the water when he saw the frog, who leapt over his head to freedom. END_OF_DOCUMENT_TOKEN_TO_BE_REPLACED

Marine reserves are a hot topic in Australia, with federal and state governments debating whether to allow recreational fishers to take fish from within their boundaries. But new research demonstrates that reserves can have a real benefit for marine ecosystems — by protecting coral reefs from floods. Floodwater plumes, like this one in Moreton Bay, do less damage to reefs that are in marine reserves. Photo: Healthy Waterways

We enjoy fishing; but we also appreciate that marine reserves have many positives. Yes, they restrict fishing in certain areas, but they have been shown to increase the numbers of catchable fish outside reserves.

Our study shows that reserves can also improve the resilience of the habitats that fish rely on. Without them, there would be fewer fish for everyone. END_OF_DOCUMENT_TOKEN_TO_BE_REPLACED

Firstly, tilapia females carry their eggs and larvae inside their mouths, providing protection which virtually ensures the survival of the next generation. They are also a particularly hardy fish, tolerant of poor water quality, pollution, low oxygen levels (which they tolerate by gulping air at the water surface) and a wide range of water temperatures (8- 42 °C). They can also survive in brackish water, which allows them to move between river systems after river flow events, and have rather flexible dietary requirements. When their favoured algae, animal waste and planktonic food items are scarce, they can readily adapt to alternative food sources, ranging from completely herbivorous to totally carnivorous (including cannibalism). END_OF_DOCUMENT_TOKEN_TO_BE_REPLACED

Originating in Europe, “nature-like” fishways are now being constructed on some U.S. rivers where removing dams is not an option. Unlike traditional fish ladders, these passages use a natural approach aimed at significantly increasing once-abundant runs of migratory fish.

On a chilly April morning, when the buds had opened just enough to cast a faint red haze on the trees, Jim Turek drove me out to see how his latest construction project was faring after a long winter. In December, work crews completed a project designed to let fish swim over the old Kenyon Mill Dam spanning the Pawcatuck River in Richmond, Rhode Island. The dam, and one that probably preceded it, had been blocking the fish’s path from the sea to their upriver spawning grounds since the 1700s. What was once likely an annual migration of hundreds of thousands of river herring and tens of thousands of American shad had dwindled to just a few hundred fish. Runs of Atlantic salmon had long since disappeared.

This was not your typical fish ladder — narrow concrete, metal, or wood contraptions that look a bit like flooded pedestrian highway overpasses. Instead, work crews had installed boulders in sweeping arcs or V-shaped formations clear across the river to create a series of broad pools. These ramped gradually from the natural riverbed up the now nearly submerged 5-foot-tall dam, whose top they had replaced. END_OF_DOCUMENT_TOKEN_TO_BE_REPLACED