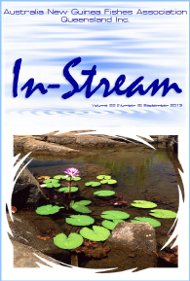 In recognition of National Threatened Species Day 2013, ANGFA Qld have produced a colouring in book depicting some of Queensland’s threatened freshwater fish – for free download. With original art from Rose Levanti-Ni​block, photos from Gunther Schmida, and editing by Adrian Tappin the book includes a colouring-in section and a section with some facts and photos about the featured fish that will help teachers and parents provide more information for enquiring minds.

Please feel free to pass a link to this page on to teachers, schools and anyone else you think might be interested. ANGFA Qld promotes a better understanding of our native fish and the waterways they live in. 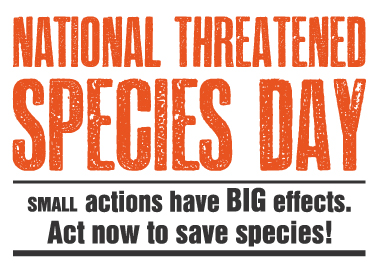 National Threatened Species Day first occurred in 2007 after Frank Manthey, Co-Founder, Save the Bilby Fund and Al Mucci, Director of Dreamworld embarked on a vision: to collectively harness the zoo and aquaria industry to draw attention to the plight of our national threatened species.

National Threatened Species Day has since run with great success in Queensland. This year, the event has expanded to a number of other states in Australia.

ANGFA Qld has produced a Threatened Fish Colouring Book as part of the event this year.

WHO: ANGFA Qld is joining with zoos and aquariums across Australia for this National Threatened Species Day in partnership with the Save the Bilby Fund.  Featuring celebrity ambassadors, Frank Manthey ‘The Bilby Man’ and Ranger Stacey.

WHAT:   Over 30 zoos and aquariums, under the banner of the Zoo and Aquarium Association will bring a range of iconic, quirky, creepy and slithery threatened species into city locations across the nation. This FREE event will inspire and educate local communities about the plight of threatened species.

Have your photo taken with a Tassie Devil, cuddle a koala, pat a Dingo pup etc!

Experience a close encounter with a variety of live threatened species.

WHEN:  8am – 2pm, with 10 – 15 minute interactive and fun presentations by keepers with their animals.

WHY:  The Zoo and Aquarium Association connects zoos and aquariums throughout Australasia in a network for conservation. We will inspire local communities to find out what is threatening many of our species, and educate them on what we can all do in our daily lives to help save them.

The Zoo and Aquarium Association connects 90 member zoos and aquariums in a network for conservation. Together, with the Australian Government, and other conservation organisations such as the Save the Bilby Fund we are working to protect and conserve these threatened species through species management programs, and education.

The collective vision of the Zoo and Aquarium Association members is to harness the membership for conservation. Together our aim is to prevent the extinction of species.

The date for National Threatened Species Day, (7th September) commemorates the last day that the Tasmanian Tiger was alive in 1936. Now, 76 years later, Australia is still facing the extinction of many threatened species including Australia’s very own Bilby and Tasmanian Devil.

The Value of Australian Zoos and Aquariums

What are zoos doing for our threatened species?

Currently, zoos and aquariums are working with government in every state and territory in Australia to participate in recovery efforts for some of the country’s most endangered wildlife. For example, zoos are the only viable solution to saving the Tasmanian Devil through the Insurance Population, a captive breeding program in partnership with the Tasmanian Government.

Extinctions are a natural part of evolution however there is no excuse for man-made extinctions. We must all act together to prevent the extinction of any more of our wonderful and amazing species.

If you thought the Ekka was just for led livestock competitions you’d be mistaken.

Every year 10,000 animals come to the show and breeders and enthusiasts of all kinds come from far and wide to show off their animals.

Fish enthusiasts, or pisciculturalists, have gathered with 200 fish and other aquatic wildlife ranging from common goldfish to tropical species, as well as Australian freshwater natives, crustaceans, and amphibians.

Fish lover Steve Banes has literally bought everything including the kitchen sink in an attempt win the competition this year.

“I’ve replicated a kitchen sink with the tap constantly running and it’s see through on the front so you can see the fish swimming amongst the dishes,” he says of his contribution to the show.

“The judges are looking for the ability of the fish to live harmoniously together as a community.

“People ask why we have fish as pets but they don’t don’t bite the postman, they don’t pee on the carpet and they don’t annoy the neighbours.”

It hasn’t always been an easy ride for the aquatic breeders who have had to fight to be taken seriously.

“A few years ago we approached the RNA, they have champion cow, champion horse, champion goat so we said ‘why can’t we have a champion fish?'”

“We marched in the grand parade for the first time four years ago and we definitely get the best cheer.

“We all dress in full suits and we get our face painted to make it a bit colourful and as you walk around you dodge the cow and horse poo.”

Mr Banes says leading a fish around a parade takes some ingenuity.

“We have the fish in a cup on a lanyard around out neck and we have it well covered with cling film.”

Kept a safe distance from the fish is the Poultry, Pigeons, Birds and Eggs display.

While the traditional runner ducks, laying hens and turkeys are always interesting it’s the birds known as ‘dinosaurs’ that many come to see.

Desley Krause is the owner of the chickens officially known as Australian Game which stand upright at almost a metre on strong, powerful legs leading to their prehistoric nickname.

“I was walking past one one day and I said ‘oh that’s ugly but I’ve got to have one,’ and that was twenty years ago and I’ve still got them,” she says.

“Temperament wise they are just absolutely beautiful, there is nothing drastic about them.”

Kept all the way over on the other side of the show are the dogs.

These pampered pooches have their own show ring so together with their owners they can display some skills for the judges.

Italian Greyhound breeder Maureen Friend whose winning pup was wearing a sparkling collar made of crystal beads that would make many human divas jealous.

“I won best of breed with my girl, she’s the love of my life,” she says.

After many years showing horses and now dogs Mrs Friend says there are perks to breeding smaller animals.

“It’s definitely easier, there is less mess to clean up.” 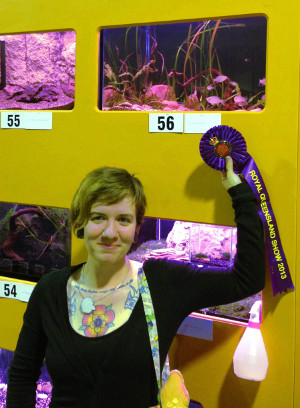 Rose Levanti-Niblock with her champion Australasian native fish at the Ekka, 2013 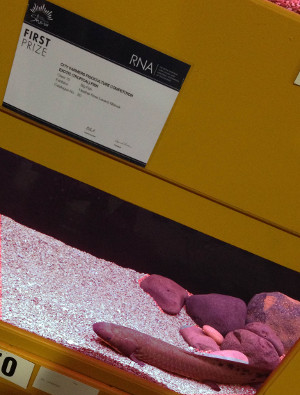 Tadpole was entered into the Big Fish category, which allows for large fish that wouldn’t fit into the show at their full size (as long as they’re at least 20cm at time of judging), and won first place.

Rose purchased tadpole 18 months ago from Ceratodus.com. His parents were wild caught and he is microchipped to prove he was captive bred as lungfish are a no-take species under Queensland law and there trade is restricted by CITES. Fossils similar to the lungfish date back 380 million years, approximately the time when higher vertebrate classes began evolving. It has remained virtually unchanged for at least 100 million years. The only natural populations occur in Queensland’s Mary and Burnett river systems. 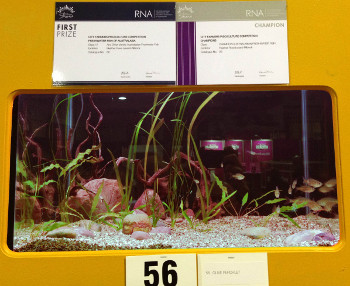 Rose also entered a group of Olive Perchlets (Ambassis agassizii) into the “Any Other Variety” class of the Australasian native category. Not only did the Olive Perchlets win their class, they held their own against Australian and New Guinea rainbowfishes entered by previous winners to take out the category as Champion Australasian Native Fish!

Rose’s display included  5 full size (65 mm), 8 medium, and 6 tiny Olive Perchlets that were “by-product” from a local crayfish farm, otherwise destined to be used to feed other peoples pets anlongside firetail gudgeons… The 2 foot display tank was furnished with red river gravel, river rocks, and vine wood. It was planted with native Vallisneria nana, Potamogeton perfoliatus, some exotic crypts and other plants.

Congratulations Rose, it’s great to see some other native fish giving the rainbows more than just a run for their money! 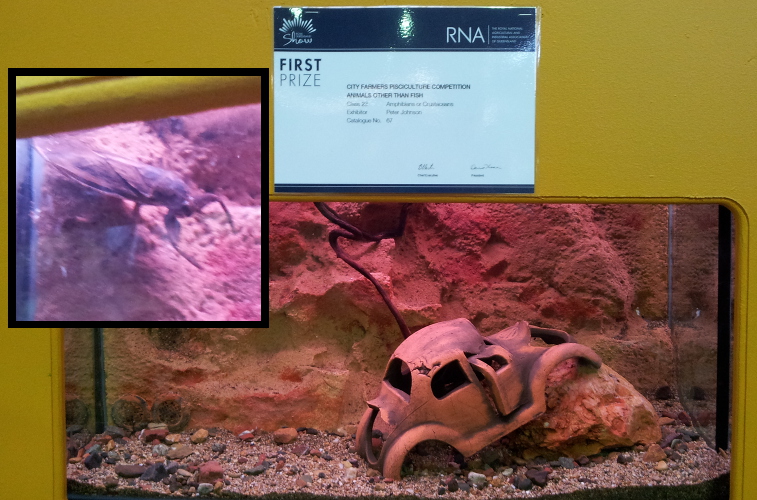 First time entrant in the RNA Pisciculture competition (and ANGFA Queensland Secretary) Peter Johnson has received first prize in the ‘Animals other than fish’ category of the show for a 7 cm Giant Water Bug (Lethocerus insulanus). The display was put together by ANGFA Queensland President, Steve Baines.

Giant Water Bugs (Australia’s largest aquatic insect) are ambush predators. They will remain camouflaged until an unsuspecting fish, frog or other prey item moves within reach at which time they grasp and hold it, mantis style, with their powerful front legs. The syringe-like mouthparts are thrust into the prey allowing venom and digestive acid to be pumped into it. The bug will then suck the fluids from the prey, casting aside the carcass when done. Ekka steward Bill Smith described this behaviour as being remarkably similar to that of his friend’s  ex-wife.

Giant Water Bugs are one of the few native animals capable of preying upon juvenile cane toads and cane toad tadpoles. Checkout the profile at the Australian Museum.

This YouTube video demonstrates the predatory behaviour of a juvenile European cousin of Lethocerus insulanus.

Notice is hereby given that the ANGFA Annual General Meeting will be held at 8:00PM on Friday 11 October of the National Convention held at Ciloms Convention Venue, location Melrose Drive, Tullamarine Victoria.

As per our constitution, all Committee Members will stand down at the AGM and their positions will become vacant. This gives members the opportunity to elect to office whomever they feel is best suited for the position.

All Nominees, Proposers, Seconders and Voters must be current financial members. If you haven’t yet paid your dues, please do so now. The nomination which shall be in writing and signed by the member and his proposer and seconder, shall be lodged with the secretary at least forty-five days before the Annual General Meeting. Closing date is Tuesday 27 August.

The Committee recognises that in order for ANGFA to flourish, the continual regeneration of ANGFA Committee with new and enthusiastic members that represent the wider interest of the association is needed. If you would like to be involved with the Committee or have any queries, please do not hesitate to contact a current Committee member or myself directly.

It’s Ekka time again and the fish displays are shaping up nicely. There’s already some gorgeous entries –  planted tanks, community aquaria, marines, exotics, and of course New Guinea and Australian native fish including stunning rainbows and some less common natives as well (not to mention some natives that aren’t even fish…).

If you’re heading to the show be sure to stop by the  Feline, Fish, and Puppy Pavilion on Animal Boulevard.

Queensland’s aquarium enthusiasts come together for the Royal Queensland Show’s Pisciculture Competition. A diverse variety of breeds are judged including the common goldfish to tropical species, as well as Australian freshwater natives, crustaceans, and amphibians.